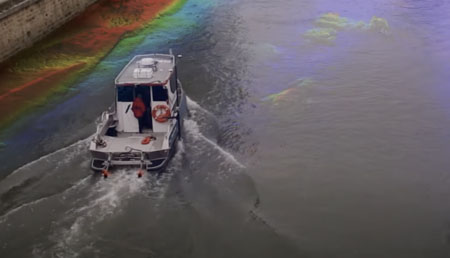 Performance trials were conducted in Paris, France. The iWBMS Ekinox and iLiDAR were mounted on a vessel of opportunity, and configured for operation in less than 1 hour.

The sonar and integrated INS interface to the compact topside unit via a single deck cable. All sensors were mounted on a small boat using the NORBIT PORTUS pole, a lightweight, portable carbon fibre solution that was specifically designed for NORBIT systems.

14km of the Seine River was mapped in less than 2 days, and the resulting 0.25m DTM was overlaid on aerial imagery. The high resolution bathymetry data shows small geological features on the riverbed. In the narrow sections of river, it was possible to achieve full data coverage on both sides up to waterline in a single pass using NORBIT’s 210°wide swath capability.

RTK GNSS corrections were interfaced to the system in real time, providing centimeter positioning accuracy. The raw navigation data was logged and post-processed in Qinertia to improve the navigation solution under bridges where satellite coverage was not optimal. The PPK solution output from Qinertia was applied to bathymetry data in the post-processing software.