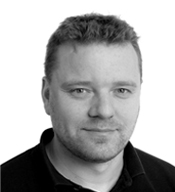 Arild Søraunet is the current Group CTO, a position he has held since 2002. In addition, Søraunet is currently Business Unit Director of PIR (ODM), a position he has held since 2016. Søraunet has experience as CEO of NORBIT Subsea AS from 2011 to 2016, Project Manager of NORBIT ODM from 2002 to 2011, Development Engineer in Cavotec Micro-Control AS from 2000 to 2002 and Development Engineer in Kongsberg Defence & Aerospace AS from 1997 to 2000.

Education: Søraunet holds a Master of Science in Applied Physics from the University of Tromsø and a Bachelor of Science in Electronics from Levanger College of Engineering.